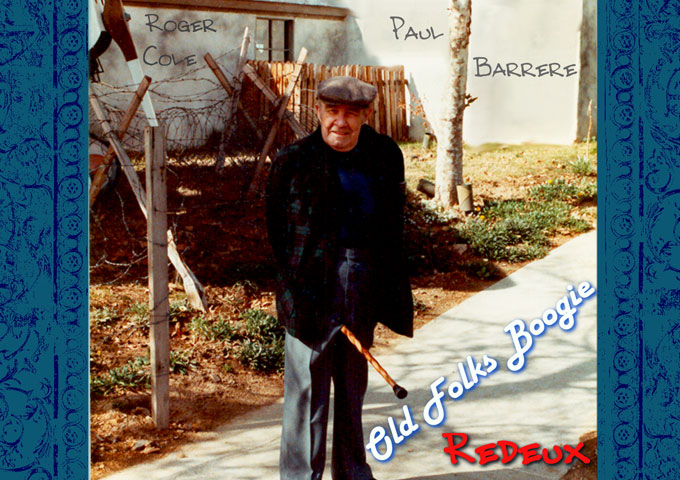 “Ya know that you’re over the hill, when your mind makes a promise that your body can’t fill!”, this is the line that inspired Paul Barrere to write the original version of the “Old Folks Boogie”, which would subsequently feature on the 1977 Little Feat record “Time Loves a Hero”. The citation came from a line Paul’s dad – an actor at the time – picked up at a vaudeville theater. He would often sing it around the house, so eventually Paul got hooked turned it into a song. For some time, Paul’s partner over at Better Daze Records, Roger Cole had been talking about re-recording the song with a fresher, more modern aesthetic. Which is exactly what occurred, and now Roger Cole & Paul Barrere release the new version under the title “Old Folks Boogie Redeux”…over 40 years later! And guess what, now it sounds like The Black Crowes met The Black Keys and had dinner with ZZ Top. In a world where we are saturated with self-proclaimed musical geniuses it’s great to hear real music coming from real people. This track is bound to make you remember bands from the 70’s and 80’s but Roger Cole & Paul Barrere are actually modern rock artists with no other comparison to present day music. Well, to be fair, maybe Jack and Meg White have come close to this rawness a few times on their records. The main guitar riff will easily get stuck in your head, and the vocals sound gritty as granola.

You can tell these guys are just having a lot of fun with this song. If anything Cole & Barrere are probably going to be remembered as one of the underground acts in this time that brought blues and rock back to their core basics. The duo’s songs are well written – in this case re-written – their instrumentation is spot-on, and its music that comes from two dudes who clearly know what they are doing.

The production is one of “Old Folks Boogie Redeux’s” strengths: Inspired flourishes, like the basslines fold effortlessly into the blues aesthetic. The percussion dances along to the deep rhythm and guitar riffs, while the lead vocals always have ample breathing room. But what really impressed me more than anything else, was not what was in the mix, but what was unexpectedly missing from it. I waited three minutes and twenty eight seconds for the explosive lead guitar solo to happen. It never did. Damn, that must have required a vast amount of restraint on the part of the players. I play guitar. I know what kind of a scintillating solo you can you can squeeze out over this inviting rhythmic foundation right here.

As always, the duo stay audacious, true to their sound, yet still continue to redefine themselves, exploring many shades of rock and blues on each of their releases. “Old Folks Boogie Redeux” is another inspired piece of work from Roger Cole & Paul Barrere.

Next post Forest Robots: “Timberline and Mountain Crest” - one cohesive and beautiful listen