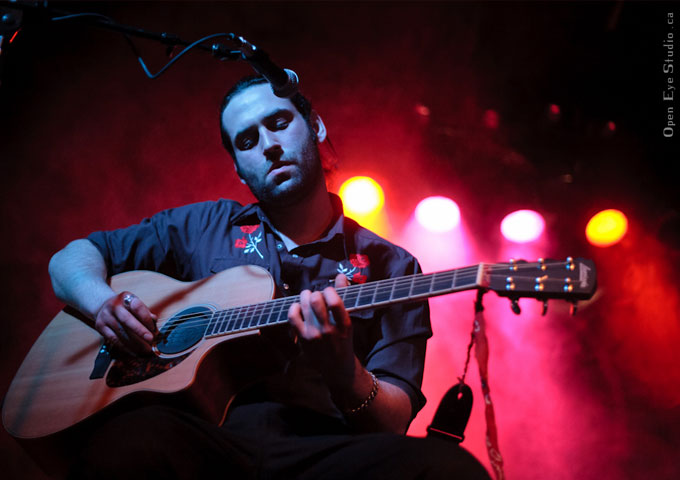 Canadian based guitarist and vocalist, Igor Laze has released 4 studio albums with his previous band Morre and toured the world extensively in over 15 countries promoting their music. After the collective disbanded, Igor continued by pursuing a solo career and released his first solo album, entitled “Departure”. His influences are rooted in rock, blues and classical music, which he infuses with jazz and progressive structures, as well as his very own nuances – all delivered in fully layered arrangements and finger-style acoustic-guitar blends. Igor picks sounds like a musical wizard, and has developed a refined yet vibrant, organic aesthetic, taking the best elements and mixing them into wonderful styles. “Departure” revolves around what once made forward-thinking rock so captivating: complex dynamics, a wide range of styles harmoniously compressed to form a variegated compound and digressions; lots of them. This 14 track recording is a cryptic, yet accessible sonic effort, sounding like a clever compendium of influences filtered through the talent of a brilliant independent rock composer, rather than yet another record, aping other records.

The jangly guitars and soaring mellifluous vocals on “The Mask”, the expansive orchestral shaping of “Into the Shadows” and the elegantly resonant acoustic guitar on the swirling excitement of “Paranoia” all work instantly, to make this album a gem.

Musically this triad of opening tracks sets the bar for the rest of the album, and defines many of its touchstones: powerful melodic and harmonic elements, rich progressive arrangements, sophisticated guitar playing, unfettered but ever-finessed drumming, deep lyricism, and layers of beautiful adorned vocal passages.

You will find all of the aforementioned elements in the superbly executed drive of “Segregation”. Igor Laze is an extremely talented instrumentalist, songwriter and singer, and it shows all across this album. Laze is continually looking to create a specific atmosphere for his tracks, based around both the musical mood and the lyrics. Something that reaches its apex on “The Dream You Wished to Give”, and then is perfectly replicated on the urgently echoing backdrop of “Perfect Storm”. Another fascinating feature of these songs, is that despite the more or less complex and multi-layered arrangements, the lead vocal melodies are always dominant and extremely ear-worming.

The keyboard work on “Conscious Bounds” is simply outstanding, as are the guitars on “Right Back at You”, and Igor’s nuanced vocals together with the string arrangement, on the ballad “Reborn”. Despite a refined sense of calibration in the arrangements, the album retains a warmth and organic appeal that echoes across all of its tracks.

It’s not surprising then that this is about as close to recording perfection as one can get, and both “We’re Falling” and the gripping “Letting Go” easily play testimony to this fact. Even during the most harrowing moments, every instrument comes through in full dimension, and are balanced with a mix that is praiseworthy.

As we reach the more sublime and emoting sounds of “Love Will”, “Full Circle” and then the all-embracing sonics of the title track, “Departure”, it becomes clear that Igor Laze has fused many of his favorite influences and sounds into something intelligent, classic, and as musically proficient as any listener could hope for.

The album has all the clarity and precision of a modern record with all the analog-styled warmth and character of classic rock projects, leaving equal space for intimate acoustics and vigorous grittiness. You will be hard pressed to finder a better record of this kind in 2020…or any other year in the new millennium, for that matter.

Previous Article "Know You" the debut album by VOFF is meant to motivate and inspire people!