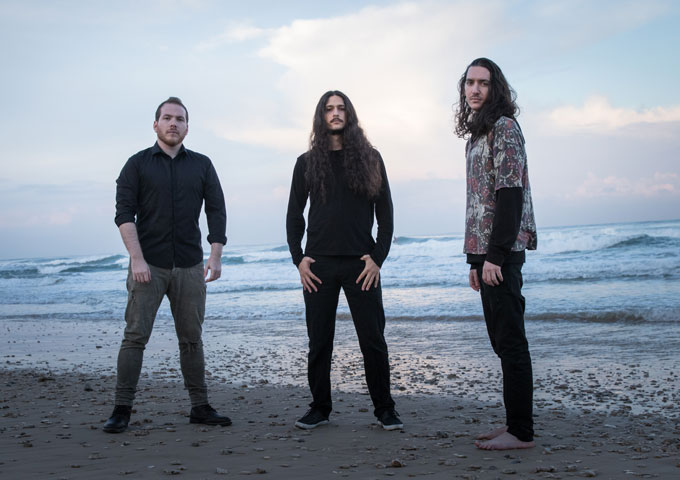 Formed in 2012 in the suburbs of Tel-Aviv, Israel, Obsidian Tide are Oz Avneya (guitars and clean vocals), Shachar Bieber (bass and harsh vocals) and Erez Nadler (drums and programming). The band’s debut EP Debris, an ambitious concept album, was released in 2015 and received critical acclaim worldwide. In August 2019, the band released their first full length album, Pillars of Creation, which is a 55 long masterfully-produced concept album. It tells the tale of a man who goes on a journey of enlightenment. On his journey, he witnesses riveting stories and learns of horrible truths. Finally, he makes a bold choice to follow his conscience, and his choice changes… everything. In October Obsidian Tide will be performing at ProgPower Europe 2020.  This progressive rock/metal festival is in Baarlo (NL), with a wide variety of upcoming and established bands in the genre including Obsidian Tide.

Obsidian Tide: We’ve been working together since May 2012, and we settled on the name Obsidian Tide a few months after that. Erez (percussion & programming) and Shachar (bass & harsh vocals) studied at music schools as teenagers, and Oz (guitars & clean vocals) is self-taught.

Obsidian Tide: Well, we released our first EP, ‘Debris’, in 2015, and our debut full length album ‘Pillars of Creation’ in August 2019, and We’re from the suburbs of Tel Aviv, Israel. Our common influences include Mastodon, Opeth and Between the Buried and Me. Our individual influences vary greatly though, as we each have a very different musical backgrounds, which we believe is key to our diverse sound.

Obsidian Tide: On the one hand, streaming has made music far more accessible to everyone; If it hadn’t been for YouTube or Spotify, we wouldn’t have known some of our favorite acts from around the world. The same goes for us – we probably wouldn’t have reached as many people as we did with ‘Pillars of Creation’ if it weren’t for the internet’s effect on music listening habits. On the other hand, most other things have gotten worse for bands: labels do next to nothing to help bands, and earning money, though of course it was never easy, has become nearly impossible.

Obsidian Tide: What usually happens is that either Oz / Shachar bring an idea – it could be anything from a riff to nearly an entire song structure in some cases – and we develop it together. Our songwriting sessions can get really intense sometimes! Since we’re all very invested in the music and our standards are very high, we could argue about a single note for 30 minutes (true story)! This means, of course, that our songwriting process is very thorough; we get down to the smallest of details, making sure that our songs are the best that they can be. We always start with the music though; we write the lyrics only after the instrumental parts of the song are all sorted out.

Obsidian Tide: So far, we did all of the production work ourselves (mostly Erez though), and recorded everything at Erez’s home studio, except for drums and vocals which we recorded at several studios around Tel Aviv (all of which have been closed down by now, unfortunately).

Obsidian Tide: That’s a tough question! Each has its perks, and all three of us love both; the thrill and energy of live performance and the creative output of pure creation. While Oz feels like it’s like making him choose a favorite between his parents, Shachar and Erez prefer the studio (not by a large margin, though).

Obsidian Tide: We’ve been performing together for over seven years now, so we have a solid DRP. About two years ago we started working with a computer and in-ear monitors on stage, so noticing when things go wrong is a lot easier. When we notice that something’s not right, we maintain eye contact and turn to Erez, who’s closest to the computer, to direct us on how to handle the incident. One time we accidentally forgot the computer was on a loop. So mid-show we get to this solo part, all goes well but then when we want to go to the next part – something is weird. The playback guitar (works only during solos) is still going. So we are stuck in this loop for an extra minute or so when Erez notices what’s going on, with his right hand muting the playback guitar and continuing to play the song with the left. Dodging a bullet, we finished the song. An already long 7-minute song stretched to something like 9 minutes. Our next song was also long, and we ran out of time – we actually had to end our last song early in that show.

Obsidian Tide: That would definitely be ‘Magnanimous’. From a story standpoint, this song is the album’s climax, so it’s very intense and emotionally charged. It has a lot of different parts and 3 different solo sections. About doing something differently – as Da Vinci said, “Art is never finished, only abandoned”. There are always songs we feel like we could have improved, or maybe we would have done them differently if we had recorded them today… If we had to choose one, maybe ‘Portent of Betrayal’ could have been a bit longer.

Obsidian Tide: When Oz started the band, he had like 2 and a half songs. We started working on those, and discovered we had amazing chemistry. We then wrote more stuff, no problems so far. The first issue we encountered: These songs had solos in them, but we only had one guitar player. At first, we just went with it – doing the solos without rhythm guitars. But this method did not last long because someone (probably Oz) had the idea that we would loop the rhythm section and then played the solo on top of that. And that’s what we did, for a long time. Another issue we had was keeping in time with the loop. So Erez had in-ears with a metronome playing but different parts had different tempos so we had to remember which part was in what tempo and click the right numbers before the next part. Some of our first songs were arranged in order for him to do that. Third issue: in this stage, all of our materials are instrumental! We pretty much agreed we need to add vocals. We auditioned singers, and we had someone for almost a year but it didn’t really work out in the end. Shachar started growling and Oz started singing, and working on those skills took something like a year before we could record the vocals (also doing some weird vocal booths in Erez’s closet). That’s not even half of them, we could keep going forever with more issues!

Obsidian Tide: Vintage drums and an overall dark drum sound (with 16” hihats). A fat Distortion yet tingy guitar sound, and atmospheric clean tones. A howling distorted bass sound and a clean warm bass tone. Airy flutes, emotional violins, cool percussion used and vocal harmonies. When playing live, we have our computer which runs the added sounds and amp sims with 6 or 7 different sounds that transition automatically. We keep polishing and perfecting those tones all the time (for the bass & guitar).

Obsidian Tide: “Hiraeth” was a tricky one. It has a really wide range of moods and approaches. Starting from a bass arpeggio, to proggy metal vibe, to symphonic post-black to post rock 70’s sound. We actually recorded 3 different bass guitars to get the right mood in each part. The drums had to be recorded in a way that they would work in both settings, and mixed differently in each section. We really like how in the last section there is a flute doubling the lead guitar, creating an awesome spacey vibe.

Obsidian Tide: Any artist’s work should originate from something they finds emotionally meaningful.
That something can be a pure emotion, with not knowing exactly what it is, and it can be something that is thought over. When it comes to politics, especially Israeli politics (which is particularly shitty), there is some kind of emotional detachment made in order to process this stuff. For ‘Pillars of Creation’, we didn’t address any political issues. However, in the stories told on this album (and our EP) you can definitely find some social criticism, relevant for today.

Obsidian Tide: Opeth probably, it is no secret that they are a big inspiration to us. It may be surprising to some that we actually love the last few albums they made, so it would be a huge honor to tour with them. Also, maybe Lady GAGA because we sometimes call Erez Gaga and he also likes to wear meat dresses.

Obsidian Tide: There’s really no way to get to people these days without social media – it’s become a huge part of our lives. Musicians are no exception to this. Making sure you get to as many people as possible is essential, and the best way to do it is maintaining a strong online presence on many different platforms. We try our best to do so – we’re try interacting with our fans on Instagram, Facebook, Twitter, YouTube, and the list goes on and on. If there’s a place you think we should be on and you can’t find us – let us know! Obsidian Tide: Videos can be a really awesome way of further expressing your music and ideas. We have 2 videos out, both are cool so check them out!

Obsidian Tide: Best advice must be to do everything you can on your own. We use our skills and keep learning new stuff in order to stay within a reasonable budget. Also, when you can do stuff on your own you can really do whatever you want and make it unique. Bad advice? “You look skinny on stage, go to the gym”

Obsidian Tide: We actually had a fourth member in the band for a while, who did vocals and rhythm guitars, and we tried auditioning for a keyboardist several years ago. None of these really worked though, so it’s just the three of us now. It’s just the way we are – we don’t feel our music needs anything that adding another band member can help with. Our chemistry is great, and we don’t think adding another musician to the band would really do any good.

Obsidian Tide: Booking the show at ProgPower Europe 2020! It’s a great festival, and we can’t wait to fly over and rock that historic stage!

INTERVIEW: Angst is one of the major themes you’ll hear in Josie Elysia’s music