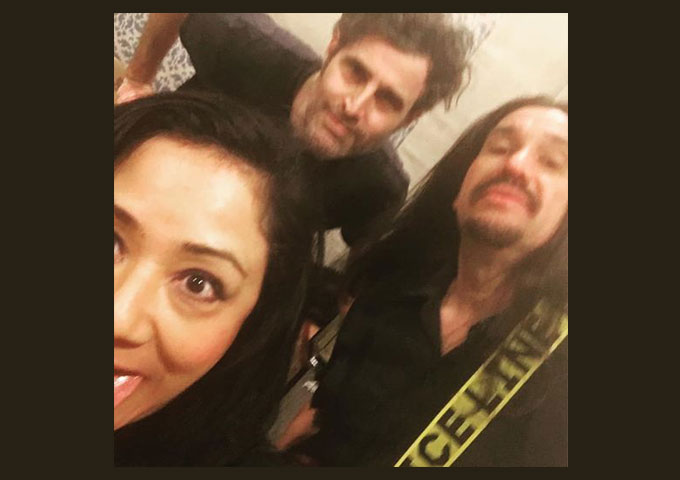 The Los Angeles punk band, Social Distance could easily have fallen into the trap of focusing on their female lead singer as eye candy and letting image triumph over quality music. Instead they have managed to avoid doing this and just focus on crafting brilliant punk-rock tunes instead. In an age when image and marketing nearly always take priority over substance Social Distance should be cherished. “Quarantine brought us together,” says the band. “We play because we’re musicians and we are not really good at much else.”

If you are sick of fake image focused bands and artists who put more effort into their booty than their music then get into Social Distance and hear what a band made up of hardcore musicians doing it for love sounds like. The band takes the spirit and emotional energy of classic punk-rock and add a more mature flavor. Social Distance’s passive-aggressive blend of punk-rock and bombastic pop, on their brand new single, “I’m Outside Your House” should win them plenty of friends in 2020, because it’s unlikely that anyone else is still doing this music, and doing it this good. Punk – in any of its classic forms – has been off the mainstream radar for quite a while.

“I’m Outside Your House” is more than just locking down one sound. This track moves in unexpected directions. The song is never content to simply hit a melody and stay there. Instead, the band opens a bag of tricks and throws in whatever they like.

It’s the type of inspiration that you hope success brings, one where the rules are thrown away in favor of unabashed creativity. Crunchy guitars, slippery bass lines and one hell of an ear-worm vocal to create a whole that is endlessly listenable.

The song keeps adding and subtracting layers, like warping lead vocals, fading to zero, and then roaring back. The lead guitar solo is almost bluesy in its delivery, backed by the speaking-shaking drums.

Social Distance show an invigorated ability to assemble powerful rock motifs that retain their grit and earthiness all throughout the track. The band takes the classic punk formula and embellishes it with a blooming propulsive groove and smartly constructed guitar lines.

Ultimately, Social Distance manage to raise the punk-rock bar a shade higher with their new outing. They’re not just bashing aimlessly away at their instruments. They really can play. Fun, exhilarating, and brilliant, “I’m Outside Your House” will really pick your spirits up on a crummy day.