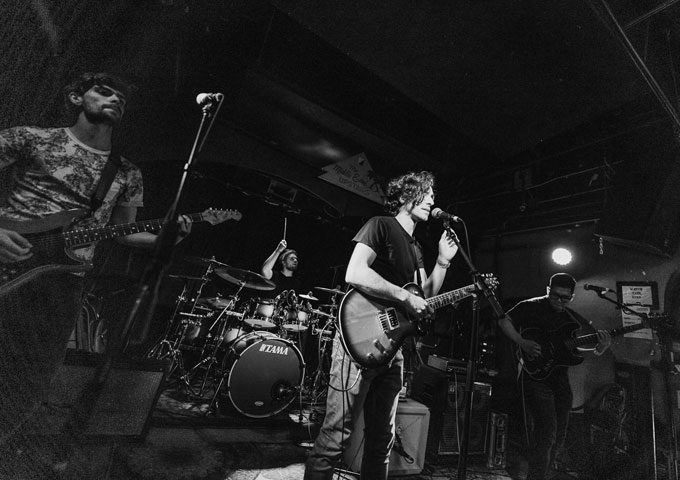 FuzzKill is a four-piece rock band that started in Boston, MA. Introduced to one another through musical theatre, the band’s sound is firmly rooted in early 2000’s pop-punk influences. They released their debut studio album, “Happen”, in early 2019, and their sophomore album, “The Get Better”, just dropped on September 19th 2020. We have all heard the biggest punk bands of the 90’s and early 00’s. Their music mainly consisted of driving drums, distorted pop-punk guitar work and a set of memorable lyrics to go with the angst-filled high energy vocals. Today punk bands are a rarity, and any good ones usually stay locked and undiscovered in the underground. Until FuzzKill arrived on the scene with their sophomore album, that is. From the outset Fuzzkill has inadvertently set themselves up for some lofty expectations that many punk fans have been wishing the genre would achieve once again. So with their newest album, aptly titled, “The Get Better”, these new tracks find the group reaching all the expected heights, they or any fan of pop-punk have previously set. Track after track, FuzzKill achieves the 2000’s pop-punk sound, updated into the here and now, in a wall of supersonic exposition without distraction.

The thunderous drums become the full beating heart of the music. Crisp and crunchy driving guitars are expertly placed, throbbing basslines ignite the rhythms, and throaty, soaring vocals are boosted by washes of mellifluous harmonies.

You actually feel the vibrant atmosphere and urgent attitude of the music. It soon becomes clear that members, Jake Smerechniak, Jordan Potash, Jude Torres, and Trey Lundquist, are taking you to new heights, rather than just floating around on the sidelines, waiting to be heard.

This superb feeling is set ablaze from the opening track, “Stupid Fucking Summer”, which comes right after the playful “Intro”. Aside from the explosive forward motion of the percussive momentum, the genius of the music, is in its ability to captivate all of your senses and stimulate your emotion. FuzzKill throw thick layers of melody and harmony into their cauldron of pulsating rhythms that will leave you breathless.

The ferocious upbeat instrumentation continues on the bone-crushing “Iced Tea” and dynamic stop-start arrangement of “Save The Date”. This is uplifting, euphoria-inducing sonics designed for the bold-hearted. The lead singer’s genre-advance in pure vocal ability, truly shines throughout here.

“Intimate Affair” even brings groove into the punk-pop equation, and it’s a marvelous thing. FuzzKill get out the acoustic guitar, and turn on the emotional floodgates on the poignant “Melodrama”. It’s easy to get caught in the web of downtempo vibes here.

“Wolfman” ups the ante with a punchy singalong anthem at its core, before the crushing guitars of “Everything is Better (September)” re-adjusts the template with another towering performance by the band. The lead vocals here, are truly astounding, showing range and power. The narrative in “Society,” places itself within a lofty context, while the song also hosts a marvelous, head-rush of a chorus that sticks in your head for days at a time.

Honestly, if all of pop-punk sounded like FuzzKill do on “On Your Own”, the genre would still be thriving in the mainstream charts today. However, having said that, I like FuzzKill best, when they flaunt their abrasive alternative rock tendencies, as on the fully powered, riff-laden “Taking Damage”.  Few bands can bridge alternative rock and pop-punk, with such a level of conviction, style, and overall coherence.

“The Feel Alright” offers the album’s most eloquent moments in a power ballad which thrives on a mesmerizing lead vocal, and minimal instrumentation. In the end, FuzzKill and “The Get Better”, exceeds all the hype, I or anyone else could possibly deliver, within a collection of fourteen songs that stand amongst the decade’s strongest pop-punk records I have come across – indie or major label!