Madi Simmons – ‘Making The Best Of My Time’

Melodie Joy is actively rebuilding her digital fingerprint and community!

Royal Imani’s energy and passion is what separates him 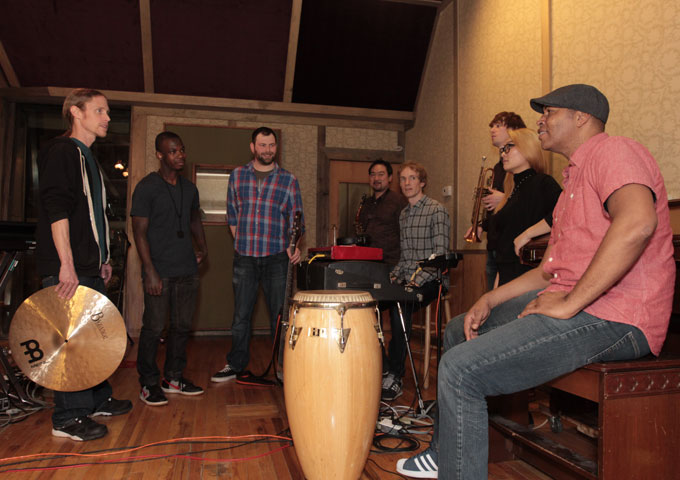 Phantom Pop is an instrumental band from Brooklyn, NY. The group combines elements of funk, soul, and R&B with the improvisation of jazz to create their own sound. Originally formed by Dave Lowenthal simply to create an album, Phantom Pop has gone on to tour the east coast, southern, and Midwest U.S. The first self-titled album was selected by WNCW Radio as one of the Top 100 Releases of 2015. The core members of the band are Dave Lowenthal – Bass; Josh Schusterman – Drums; Noah MacNeil – Keyboards; Atsushi Ouchi – Saxophone; Matt Giella – Trumpet; Songyi Jeon – Voice; Theo Moore – Percussion; JSWISS – MC. Phantom Pop has recently released the single “Hometown”, which will be on their upcoming EP “Beta”, to be released on October 17th, 2016. The ability to perform at the highest levels of musical endeavor and innovation and still create a track that may appeal to the largest possible audience is an endeavor that not many artists succeed at. Jazz-fusion and all its derivatives is not exactly your regular Top 40 easy-swallowed fodder.

However two things may attract regular fans, the band’s cryptic, but trendy name, for obvious reasons, and secondly, for anybody who can dig the suave, sophisticated pop sounds of an intelligently accessible ‘pop’ band like Steely Dan, there is absolutely no way they cannot enjoy the tones and timbres of Phantom Pop. Yes, this band is in a totally different genre, and yes, they dig a whole lot deeper, technically and musically – with more intricate arrangements and rhythms – but damn are they as smoothly catchy and elegantly smart as the Dan!

Is that a bad thing? Hell no, even Weather Report made records that were catchy as wildfire, and believe me they never once traded in their musical integrity for commercial success. I realize jazz purists, and maybe even the band themselves, will be sneering about my allusions to Steely Dan, but I’ve never given two hoots about purists anyway, and I’m not starting now, especially with a brilliant band, this accessible to wider audience!

Surely “Hometown” is among the very highest accomplishments of what might be dubbed “accessible jazz-fusion”, combining an ear-endearing melody, and sweeping harmonics with progressive chord voicing’s, rich dynamic horns, and impossibly bubbly drum rhythms and rolls, all tied together with gut-thumping bass lines. Phantom Pop lends themselves both to extensive radio play and extended musical contemplation in my book. Quite a feat! This is essentially an extremely well-crafted tune – strictly arranged and perfectly performed, but with all the warmth and musical interaction of an afternoon jam. There’s enough energy and drive to spare in this exuberant work, with clever little musical deviations running through its six minute duration.

Not least the eclectic little synthesizer interlude which smartly breaks down the musical tension. The brass nearly steals the show with magnificent efforts, but so does the drums, the bass and the understated female vocal harmony lines which so beautifully smoothen out the whole sound.

“Hometown” is tight and complex yet still melodic and a refreshing break from endless noodling and meandering solos that plague so many of this genre’s releases. Here when a musician takes the focus he does it within the parameters of the tune rather than considering it his 35 seconds of glory! Creativity together with discipline, structure and technique in music do not need to be boring. Phantom Pop proves that effectively on “Hometown”!

Next post Correigh: “Under The Influence” - the throbbing glow of subtle magic!

Previous Article Sam Pollet: “Against the Current” - creative and catchy!

Neshama – Something In My Heart (ft. Ari Burns) – New Single Out Now!

R.W.P. has a special passion an attitude for music!