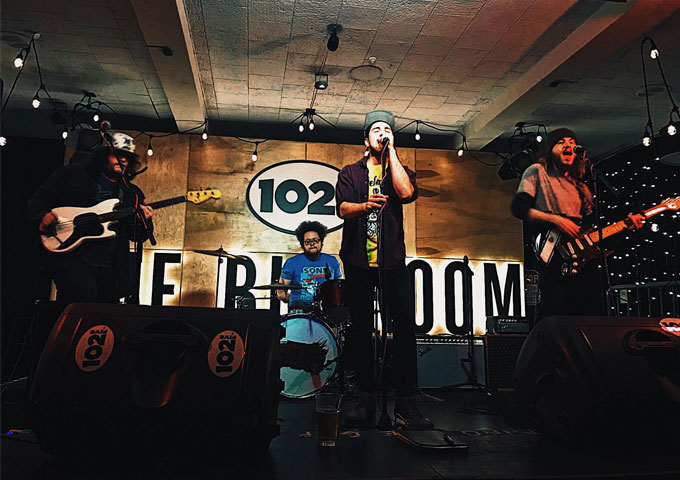 Since being launched in 2017, Bowling Green, Ohio, Indie Rock band, American Spirits, have also founded The Summit Shack, a local DIY venue that has hosted over 25 bands since its inception in the same year. 2018 saw the four piece band release their album “Nowhere Near Perfect”. This recording will grip you by the neck and slam you into the ground. It’s simply one of the most listenable Emo albums you would have heard in a while. You could play the whole thing through without getting bored, probably every day if you wanted to. The music is catchy. The lyrics are clever, they make a statement at every turn, and are easily sung along with. Top to bottom, “Nowhere Near Perfect” is just plain good. Their songs don’t just contain a bunch of simple, repeated chords and typical lyrics, the music is genuinely interesting, as they tackle the ills of the 21st Century, which impair our relationships, social status and psychological well-being.

At the same time American Spirits is not one of those bands who squeamishly preach and implore. They make powerful affirmations in just over 3 minutes, and leave you to work it out for yourself. The album’s opening track, “So Much Time Has Pabst”, right off the cuff, engages the Western World’s capitalistic tendencies and its impact on our personal lives.

The track interchanges, restrained verses, impacting bridges, soaring choruses, and an insanely pummeling outro. Every song works off the one prior to it, setting an accurate atmosphere for itself. So by the time band dive into the phrase: “I’m not content, with the content, I want more, more, more…” on the carefully paced second track, “Blanket Forts”, you’re already hooked and singing along.

Originality is a tough quality to achieve within the music world in this current age. The band conquer this feat with ease and it shows. What distinguishes American Spirits is their flair for conjuring idyllic radio melodies embedded in coarse, jangling guitar-driven soundscapes; they move from serenity to a scream, where they’re most beautiful when they align between Emo and Hardcore.

This quality is manifested in “Anthem” – as it is on all the other songs to be honest. It’s the clarity and authority of American Spirits sound which is impressive. Just because they’ve only been together for a short time, doesn’t diminish the sonic satisfaction of their performances and production.

Deeper inside the substance of their arrangements is the density of their musical dynamics, as the band’s sound again teleports between sweet coated yearnings and searing malice on “Open 9-5”, which hallmarks the provisional rise in credibility and popularity of emo revivalism.

The arrangement is bold, spiny, and played with intensity. Perhaps nothing confirms this better than the closing song, “C’est La Vie”. The guitars ring out with resonance and everything sounds simultaneously digestible and almost elegant, forcing even casual listeners to chalk it up to a win.

Whatever the band’s approach though, the songs that shine brightest on “Nowhere Near Perfect” are those that strike a balance between American Spirits at their most musically and lyrically ambitious, together with their raw immediacy. Tightly-wound, well-thought-out, intellectually sharp and instinctually captivating, this album will become the benchmark to judge the rest of the band’s upcoming catalog.

Tommy Botz – “Family & Friends” has a lot to say about life